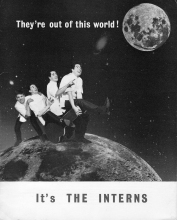 The next group was The Interns 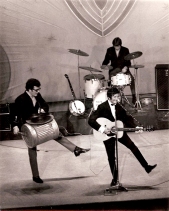 I was going through some old images recently and found these.

The Rikki Alan Trio was my first Pro group. We formed in about 1957 and used to play all the rock numbers of the day and especially the Everly Bros. Both Rikki (bass) and Gerry (guitar and Piano) were brothers and the close harmony was excellent.

Next came the Interns. This band was sponsored by Ivor Arbiter, he was the man who got Ringo to play Ludwig drums. Those eagle eyed amongst you will notice that the Interns logo on my bass drum is not dissimilar to the Beatles logo. That is because both logos were painted by the same guy. A one armed sign writer who worked for Ivor at Drum City in London in the 1960’s. It’s amazing when you think that today, millions of pounds can be spent on designing the most effective logo and yet back then, it was designed by the sign-writer and the Beatles just accepted it!

Next of my pics here is with the King of Skiffle Lonnie Donegan. Lonnie was never huge in the States although he did have one big hit there which was, “Does Your Spearmint Lose its Flavour on the Bedpost Overnight”.  However, in Europe he was huge and has the reputation for starting the whole Beat Boom in the UK. Every kid went out and bought a guitar and formed a Skiffle Group when Lonnie’s first single ‘The Rock Island Line‘ went to No 1! Even the Beatles had a Skiffle group, they were called the Quarrymen. Many years later Singer/Actor/Record Producer Adam Faith got a whole load of the guys that were influenced by Lonnie together and they made and Album. If my memory serves me right I can recall a number of the names, Elton John, Rory Gallagher and Brian May plus a whole bunch more. Sadly Lonnie passed away in 2002 from heart problems, he had , had three heart bypasses in previous years.

I have some great memories of working with Lon at some of the greatest venues in the world, including the Riviera Hotel in Vegas for a couple years on the trot. The Greek Theatre in LA, Harrah’s Hotel in Lake Tahoe, The London Palladium, The Talk of The Town London, with Judy Garland and in Australia, Iceland, and all over Europe. Many stories to be told, stories of working with (either playing for or supporting) Dusty Springfield, Ray Charles, Count Basie, Vic Damone, Judy Garland, Englebert Humperdinck, Dean Martin, Bill Haley and Little Richard to name just a few. A great way for a young guy from a small town in Wales to grow up. And a number of coincidences of which I intend to post at a later date.