I know, it’s been an age in between posts! But I have finally found a few minutes to jot something down.

During my recent trip to the Golden Valley, I was fortunate enough to actually get out and explore the immediate vicinity, (my apologies if I repeat myself here and there).

You will recall that I went to a village in the Valley known as Vowchurch. Well this time out I went in the opposite direction and visited Peterchurch. Then the next time went back to Vowchurch and then on to the next little village which really was like stepping back in time.    However, the first thing that I saw as I entered Peterchurch was a Second WW US Army Ambulance up on a ramp! Not something I expected to find in the depths of darkest Herefordshire.

Kind of weird really and something that made me stop in my tracks and just look at it, and wondered who would have driven it etc.

Immediately opposite the truck was the church of Peterchurch. This was a bigger one than the previous church I had visited but part of the same group (not the correct term I know) and administered by the same clergy. In front of the church was a magnificent example of an ancient Yew tree. The tree is recorded as being at least 850 years old! Apparently, in the Middle Ages many of the churches were used as a refuge and ‘forts’ as the villages were regularly raided by Celtic warriors from over the border in Wales.  The main weapon of the day was the bow and arrow and, what wood do you think the bows were made from? Yes absolutely correct Yew. So that it is why in most of the church yards in the UK you will find a really old Yew tree in the yard. 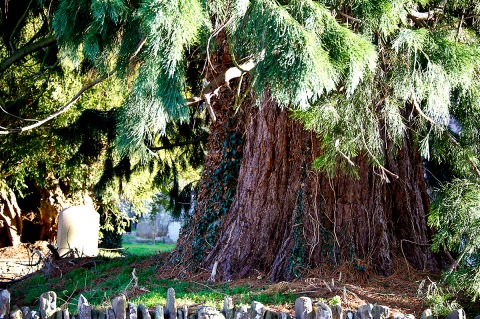 The next village was back to Vowchurch and then on to the old village of Turnastone.  As I entered the village it was just like stepping back in time, the first thing I saw was an old farmhouse. It was pretty old but also it was empty. What once was obviously a magnificent family home, was now just sitting there rotting away.  From what I could gather it appeared the farm business was another victim of the current economical downturn that is affecting everyone.

Turnastone Court really would have been a beautiful place to live back in the day, and its garden backed on to the little River Dore. However, if I thought this was quaint, I wasn’t any where ready for what I was to see next. 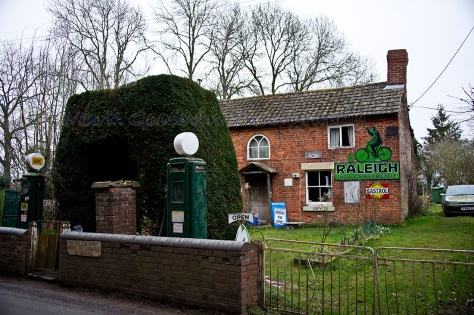 It was almost like stepping onto and Ealing Studios British Film Set. It was absolutely wonderful, well it was for me, I must have take about 60 pics of the place from every angle.

I eventually came to St Margaret’s church and I went in side, it was a sweet little church and once again steeped in history. I took a number of photos many of which are still in the workflow but I will show them as soon as.  Meanwhile, I will leave you with just one more pic. This was one I took of a memorial plaque on the wall inside the church. 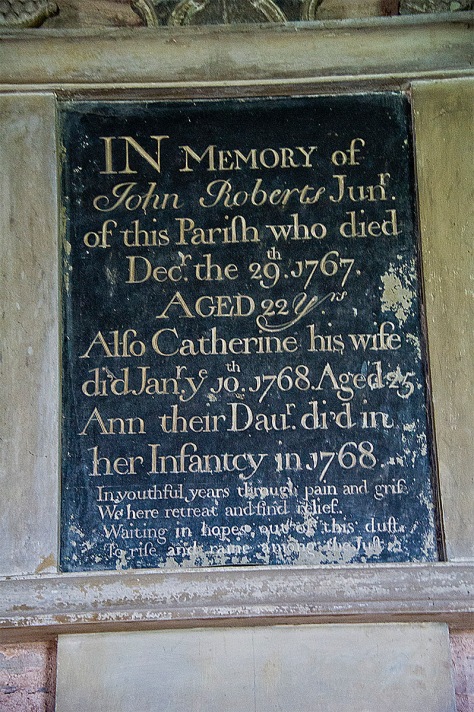 It is written in old English where the ‘S’ looks like an ‘f’ and the Stonemason would abbreviate words to suit, as he was engraving to ensure it all fitted on the stone.  The way that I read it is that young John Roberts Junior died just after Christmas on December 29th 1768 at the age of 22.  Then just 12 days later his wife Catherine who was 25 also died as did their daughter Ann. I couldn’t find out anything out about the family or why they perished, but the Plague and the Pox were around at that time along with all the other diseases of the day, and obviously without any real pharmaceuticals to treat the illnesses with.

The poem at the bottom reads: In youthful years through pain and grief, we here retreat and find relief.  Waiting in hope out of this dust, to rise and reign among the just.